short·cut (noun \ˈshȯrt-ˌkət also -ˈkət\): a method or means of doing something more directly and quickly than and often not so thoroughly as by ordinary procedure (via merriam-webster.com).

Who doesn’t love a good shortcut? If you use them, you get places faster, get more things done, or do something at a fraction of the time. But, as the above definition suggests, shortcuts are often not as good as the original thing. Unfortunately, with respect to mathematical procedures, the same holds true. I’m personally a math teacher who’s big on teaching for understanding rather than simply to be proficient, and so I never EVER show my students the “shortcuts” that work but don’t follow any mathematical principles. Sure, they do the job okay, but I feel that they come at the expense of students understanding and/or consolidating mathematical rules. Besides, a few of these shortcuts don’t actually save any time, steps, or pencil lead anyway, so why do they persist? My guess is because teachers today were taught the same shortcuts when they were students back in the day, and so we teachers perpetuate the same ill-advised methods to the next generation because, well, they work.

There are two such shortcuts I have identified (though definitely not the first person to do so) that I am on a mission to remove from the face of the Earth. I will show definitively that the more mathematically-sound procedure is actually just as fast, if not faster, than the traditional shortcut. Note: don’t worry if you’re not a math whiz – chances are you’ve been taught these shortcuts before so some of this will ring a bell.

Bad Shortcut #1: Solving equations by moving terms to the other side of the equation (i.e. the Magic Portal Method)

So, the premise is this: to solve a linear equation, such as 3x + 7 = 22, you would first need to remove the 7 from the left side of the equation in an effort to isolate the variable, x. How have most students (including I) been taught to do this? Well, we simply move the +7 to the other side of the equation and change the sign so that it’s now -7. But here’s the issue: why does the sign get to change when a term moves to the other side of an equation? Is the equal sign a gateway to some sort of magic portal that transforms positives to negatives, goodness to evil, or Rob Ford to a respectable political figure? Of course not. There is no justification for changing signs. This is a shortcut without a mathematical leg on which to stand, and yet it is so widely popular (strangely, I can’t find a consistent name for this shortcut, so I’ll refer to it from now on as the Magic Portal Method – trademark). Yes the method works, but when you really think about it, it actually doesn’t make any sense! Why not do something that DOES make sense?

As a recap, equations are math statements with two sides showing that two expressions are equal. If one side of an equation is altered, the same change must be made to the other side in order for the expressions to remain equal. If 5 is added to one side of an equation, then 5 must be added to the other side in order for the balance to be maintained. This is the essence of solving equations using the Balanced Method. The mantra that I chant with my students is: “Whatever you do to one side of an equation, you do the same thing to the other side,” which is mathematically valid. Terms are removed from an equation by performing inverse operations (i.e. doing opposite things). In other words, we undo whatever is happening in an equation. To show how the Balanced Method compares to the Magic Portal Method, here are the solutions to solving 3x + 7 = 22 using both approaches:

What if there are variables on both sides of the equation? Let’s see: 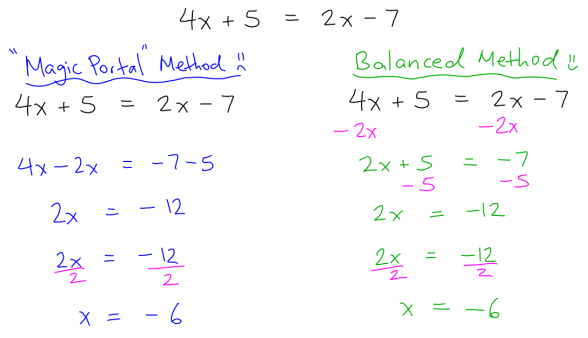 As you can see, the Balanced Method uses the same number of steps as the “shortcut.” Also, note that in the solution using the shortcut, the Balanced Method is actually utilized at the end (dividing both sides by 2). Why should we use two different strategies when one will suffice?

Whenever students share with me that they have learned to solve equations by moving terms to the other side and switching signs, I ask them why they are allowed to do that. Their most common response: “Uhhh…just ’cause.” We math teachers are not doing students favours by promoting nonsensical tricks that don’t actually help with making life easier. If the Magic Portal Method isn’t really a shortcut AND it doesn’t make sense mathematically, then maybe we as math teachers should reconsider sharing it with our students and instead focus on the more mathematically-favourable Balanced Method as a way to solve equations.

Okay, so this is also technically solving equations, but when two fractions are equated, such as x/4 = 21/28, we’ve been historically taught to use another little trick to solve buggers like this: cross-multiplication. Simply put, the first step to cross-multiplication is to multiply the numerator of one fraction with the denominator of the other fraction and make the products equal. Similar to moving terms to the other side of an equation, this procedure is also without merit. Again, this method works, but math students typically do not know why they can do it, and that’s the main problem. Let’s contrast the cross-multiplication solution to x/4 = 21/28 with one using the Balanced Method:

Well, this is embarrassing. It seems that the Balanced Method provides the Usain Bolt of solutions, while the cross-multiplication solution is more like an injured mule. Clearly, the shortcut is the long-cut here. You may wonder how the Balanced Method can be used if the variable is in the denominator rather than in the numerator. All you would have to do is take the reciprocal of both sides to fix that issue (i.e. flip both fractions upside-down): 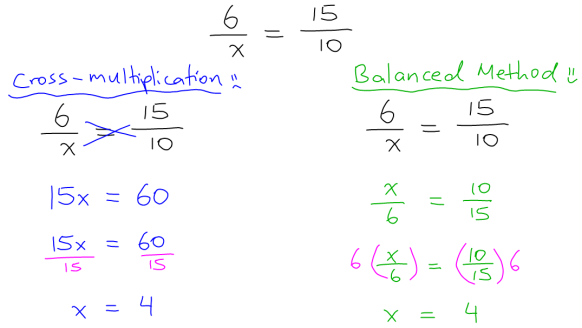 So there you have it. It appears that moving terms to the other side of an equation and cross-multiplication are techniques that not only students use without any understanding, but they also don’t even make math any quicker. By instead focusing on the universal approach of the Balanced Method, math teachers can promote a sound understanding and a better way to solve equations. Let’s not share the poor methods of our forefathers and break the cycle of ineffective math skills. After all…